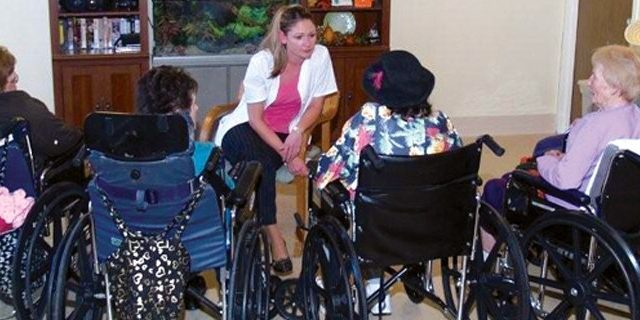 St. James Rehabilitation and Healthcare is a top sub acute healthcare service, short-term rehabilitation and long term care facility in New York with 230 beds. Of the facility’s residents, 99% come directly from an acute care hospital and the average age of a resident at the facility is 83 years old.  These residents tend have a number of health issues with an average of 7-8 diagnoses each.

St. James’ challenge has been that with the state of healthcare today, hospitals are releasing patients sooner to rehabilitation facilities such as St. James. Bill St. George, the facility administrator, has witnessed a transformation in the types of medical procedures that St. James has been called upon to perform.   In the past IVs used to be rare but they have become a common procedure.

“Venous access is often a challenge with the sick and elderly residents since they can easily become dehydrated and have rolling veins”, said Kelly Lunghi, RN, Assistant Director of Nursing.

Karen Irwin, the Director of Nursing, said the nurses in the facility didn’t have the confidence to start IVs comfortably as it wasn’t something they had often been called upon to do. St. James, like many other facilities, adheres to the two-attempt rule of trying to gain access two times and then escalating.  This resulted in one of two scenarios: patients were either sent back to the hospital or an IV agency was called in at an expense of $250 per visit to come and start an IV.

St. James purchased an AccuVein AV400 vein illumination device recently to try to avoid the incidence of hospital readmission, to avoid calling an outside company in to start IVs and to help give nurses confidence to start IVs. Since purchasing the AccuVein AV400 vein illumination device St. James has seen the confidence of the nurses increase significantly and Karen Irwin reports, “We haven’t called out for help once since we’ve gotten the device.  The nurses love it.”

Not only do the nurses love it, but they have become more comfortable and proficient accessing residents’ veins.  It is ultimately the doctor’s decision whether to keep a resident at St. James or send them back to the hospital.  When they hear the confidence in the nurses’ voices they are much more likely to allow the nurses to start IVs.   In fact while the average facility returns 30% of their residents back to the hospital, St James Healthcare has been returning only 10%, due in part to their purchase of the AccuVein AV400.